What does a Board of Directors do?

As an organisation grows, the need for expert governance, assistance with core strategic guidance and the implementation of a code of conduct and key policies will increase.

What is a Board of Directors?

You’ll find a Board of Directors in a range of organisations, and their title will vary slightly depending on the sector and industry. The Board’s role is that of a collaborative leadership group put in place to carry out the overall governance, management and strategic decisions that will affect the organisation across every level. The Board of Directors is elected by the shareholders in order to represent and protect their vested interest in the company.

The Board of Directors has a range of duties. They are responsible for making decisions to recruit or remove executive staff such as CEOs, COOs, and CFOs, as well as creating succession plans for these top-level positions to ensure the continuous success of operational performance. The Board will also provide critical direction for the company’s strategies and goals that align with the overall mission statement or constitution, as well as implementing and reviewing codes of conduct, internal compliance, and risk management. They monitor the financial performance of the organisation to ensure there is proven shareholder or member benefit each financial year, as well as communicating yearly results and other news to shareholders regularly.

All public companies are required to have a Board of Directors, and many private companies and non-profit organisations will opt to form a Board as well. Often led by a Chairperson, this role has a heavy influence in the direction of the Board.

Should a CEO be on a Board of Directors?

Many companies, particularly ones that scale upwards rapidly, will have the CEO also serving as the Chairperson of the Board. However, it can be argued that it’s in the business’ best interest to separate the two roles. While the two roles can and should work closely together with the common goal of strengthening the organisation’s performance, minimising risk and increasing client or consumer support, it’s important to note that the Chairperson’s role is to govern, while the CEO’s role is to manage their team within the business. This means they do not have the same roles; while they share responsibility of leadership, they perform this leadership in different ways.

It’s important to distinguish the difference between a CEO’s duties and the role of the Board. The CEO performs day-to-day leadership from a top-down position with their influence filtering through to their direct reports and subsequently their reports’ teams. The Board’s has more overarching power – they carry more responsibility for the financial and legal aspects of the organisation, as well as appointing executive and C-Suite personnel.

One major argument against a CEO serving on the Board, particularly as the Chairperson, is that executive salaries are decided by the Board. A CEO serving on the board and deciding on their own level of compensation at the expense of shareholder profits could negatively impact their view of board members.

A critical task of the Board of Directors is to carry out corporate governance, which includes how the CEO runs the organisation in alignment with the mission statement and shareholder wishes. A CEO who is also serving on the Board may not be able to effectively serve the shareholders and prioritise their best interests while also ensuring successful day-to-day running of the company, since they essentially have to monitor their own performance. A Board that is led and made up of independent members is able to effectively identify and monitor areas of the business without bias that aren’t performing and get them back on track with strategic corrective decisions.

Can shareholders remove the Board of Directors?

The Board of Directors is elected by the shareholders, and they can also remove or vote against board members from being reelected. If the shareholders are unhappy with a board member’s performance because they have committed a serious breach in their duties, performed poorly or has personal conflicts of interest with their role on the board, the shareholders can use their voting power to remove a member and appoint someone new.

The shareholders must also act in accordance with the Corporations Act, which contains a replaceable rule stating that directors can be removed by a resolution of the shareholders.

Why have a Board of Directors?

The benefits of having a Board of Directors are wide ranging, particularly as an organisation grows. The executives’ attention and priorities will be working in the business to ensure its smooth day-to-day running, expansion and profitability.

Establishing a board structure will provide the company with directors whose experience allows them to work on the business; specifically long-term strategy and policy formation, creating conduct and compliance guidelines, identifying areas of risk, and setting long term financial goals that see a return on investment for shareholders.

The company will ultimately benefit from board members who bring their own industry experience, niche skills, and knowledge to help grow the company. Bringing in expertise from outside the business also builds the business’ integrity in the market, as well as illustrating that your business is committed to fair and appropriate corporate governance. Chris Morrison is the founder and Director of Meritos, an executive search and recruitment business working with purpose-driven organisations. If you're interested in connecting with Chris, you can find him on LinkedIn here. You can also reach him on 02 9055 6836 or via email at [email protected]

Questions to ask to help you understand a candidate:

2. What do you enjoy about your current workplace?

3. How does a manager get the best out of you?

4. Describe the best team that you’ve ever worked in.

The reasons why I ask these questions: What does a Board of Directors do?

read 4 min As an organisation grows, the need for expert governance, assistance

10 steps for success in an executive job interview 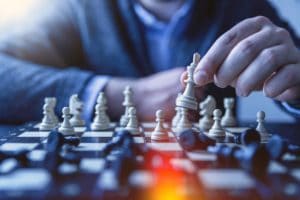 5 characteristics of charismatic leaders that will motivate employees

read 3 min As a leader, it is important to inspire and motivate 5 top tips to be a hybrid-working champion Our top tips to update your LinkedIn profile in 2021

PrevPrevious10 steps for success in an executive job interview